A Rare Giant Squid Caught on Camera Near Japan’s Coast

A rare giant squid lost in a Japanese port has been redirected to the sea a week after having been discovered. The finding has marveled walkers and experts. The large invertebrate, four meters long, was discovered by fishermen on December 24 in the port of Toyama, on the northwest coast of Japan. Not caring why the animal wandered into the marina, everyone was just curious and eager to take pictures.

The squid was then driven out to sea by a diver, Akinobu Kimura. He said he felt a bit bad when the great invertebrate is wrapped around his body and hung to his arm. 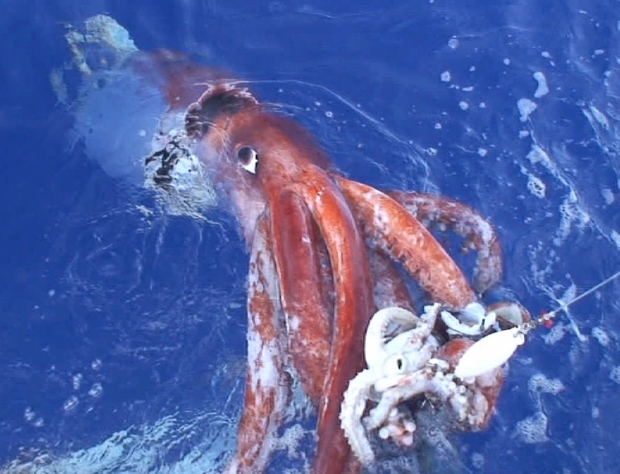 “My curiosity was way bigger than fear, so I jumped into the water and go close to it,” Akinobu Kimura told CNN. “This squid was not damaged and looked lively, spurting ink and trying to entangle his tentacles around me. I guided the squid toward to the ocean, several hundred meters from the area it was found in, and it disappeared into the deep sea.”

An official at Uozu Aquarium, who took pictures of underwater cephalopod, was impressed by the size and beauty of the rare giant squid. “It was incredibly beautiful, its body was bright red,” he told the television channel TBS.

Giant squids are sometimes caught in fishing nets but it is very rare to observe them alive. They remain for scientists mysterious creatures that live at great depths and can reach about ten meters long. For scientists it remains a mystery why this shy animal came to the coast.