7. Ningen  Google Map Sea Monster
There had been some speculations over the past few years about the existence of gigantic humanoid life-forms that live in the icy waters of the Antarctic.

Some researchers went further to claim they spot on multiple occasion “Ningen” (lit. “human” or “Earthling”). According to Eyewitnesses description, the creature is completely white in color, measuring 20 to 30 meters long.

Some descriptions also claim the sea monster has a human-like shape, legs, arms, and even five-fingered hands, as well as human-like eyes and mouth. However, other eyewitness described Ningen as having fins or a large mermaid-like tail instead of legs.

But finally a Google map sighting reveals a mysterious sea creature similar to the description of the sea monster the Japanese eyewitnesses describe. Since the Google finding has been released, the Japan government has been studying the case…

Recently an unidentified Sea Monster photographed in Corfu Island, Greece. The creature has a resemblance a little bit like dolphin, Cuvier’s beaked whale, manatee, as well as a hippopotamus.

The photograph was taken by a Scotsman named Harvey Robertson, while visiting Greece. During the voyage, he wanted to capture the fluorescent waters of a sea cave on the island of Corfu. By hazard, he took the picture of a giant sea creature, which he discovered until much later while viewing the photos.

He was amazed by the strange creature and called professionals for help. Until, the scientists remain skeptical and unable to accurately identify the beast. Many biologists remained speechless at this gray mass long snout and small black eyes.
For now, this Greek Nessie remains classified in the folder of “known unknowns”, a thing we know we don’t know. The ocean depths always reserve many surprises for us. Clearly, we will always have new sea creatures to discover. 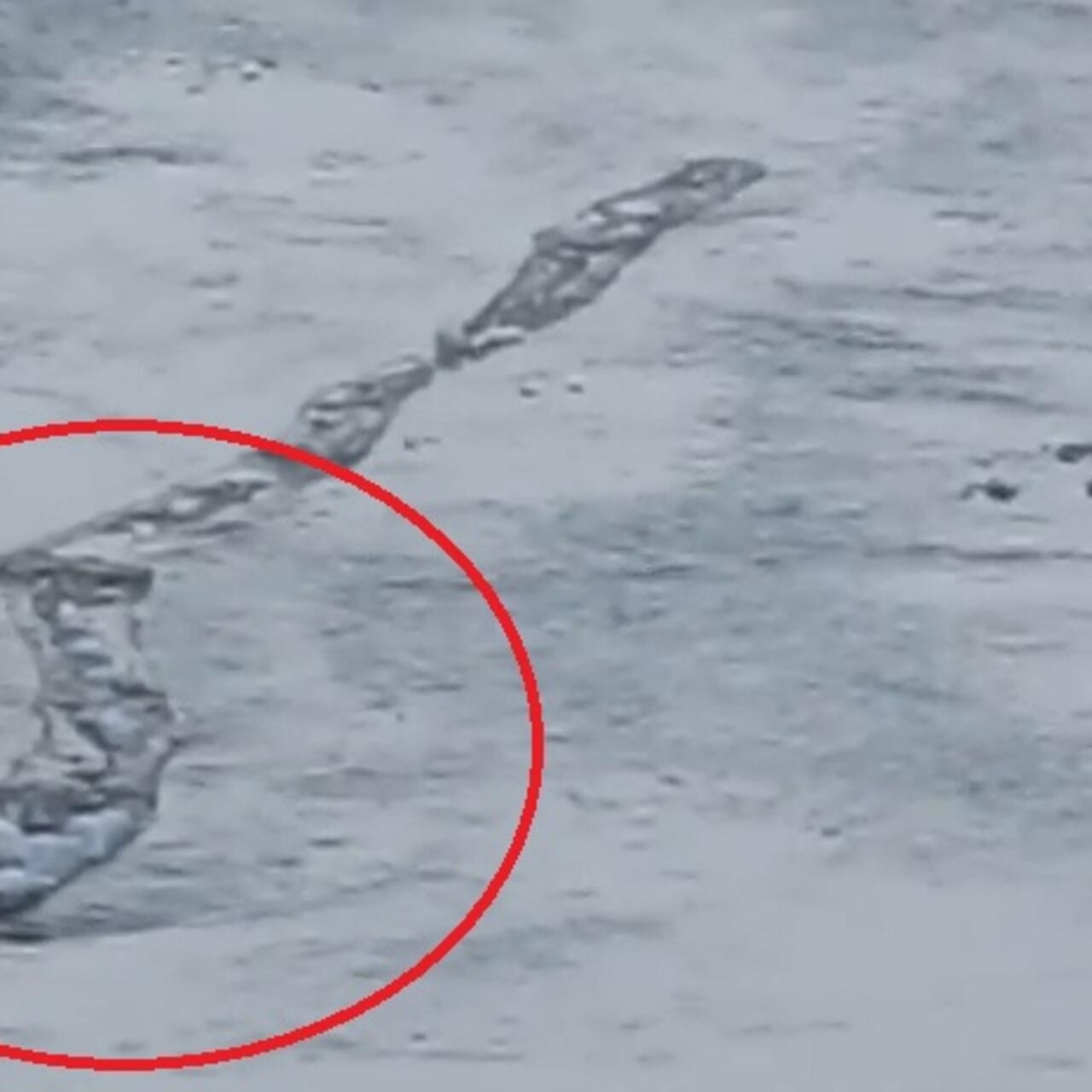 5. The Iceland Worm Monster (Lagarfljóts Worm)
Lagarfljót worm, or simply Iceland Worm Monster, is a mysterious creature (cryptid) which is supposed to live in Lagarfljót in Egilsstaðir. It is reported living in a freshwater, a below-sea-level, glacial-fed lake which has very poor visibility as a result of siltation.

Eyewitnesses describe it as longer than a bus, or 39 feet (12 m). Some people claim to see the giant outside the water, lying coiled up or slithering into the trees. It is a “many humps” type of Lake Monster, rather than the simply serpentine type of, for example, the Loch Ness Monster.

Sightings of the Lagarfljót Worm have been logged since 1345 and continue into the 21st century. Some notable reported sightings including in 1963 by the head of the Icelandic National Forest Service, Sigurður Blöndal, and in 1998 by a teacher and students at Hallormsstaðir School.

The most recent notorious observance occurred in February 2012 when the Icelandic national broadcaster, RÚV, published a video showing the Lagarfljót Worm swimming in snow-covered icy water. Several experts have judged the video to be genuine.

The name Hook Island Sea Monster, sometimes called the tadpole creature, refers to a 90-foot mysterious sea creature reportedly sighted off the Coast of Hook Island. The beast looks like a giant tadpole, having a gaping mouth with small teeth and eyes placed on top of its head.

The first reported sight of the monster was in 1964 by Robert Le Serrec and his family. According to their report, the tadpole creature moved towards their ship attacking them with its mouth open, as if it would swallow the ship.
The giant animal had its tail injured, probably by a ship’s propeller or by a larger creature.

Robert Le Serrec stated: “It was only when we got to within 20 feet of the serpent that we could see its head clearly. The head was large, about 4 feet from top to bottom, with jaws about 4 feet wide. The lower jaw was flat like that of a sandfish. The skin was smooth but rather dull, brownish-black in color, the eyes seemed pale green, almost white. The skin looked more like that of a shark than an eel. There were no apparent scales. Nor did we see any parasites around…

He continued to say: The creature was about 90 feet long. Behind the head the body was about 2 feet 4 inches thick and remained that way for about 25 feet, and then it gradually tapered into a whip-like tail. The general colour of the body was black with 1 foot-wide brownish rings every 5 feet, the first starting just behind the head. The skin was smooth but dull.”

3. The Loch Ness Monster
The Loch Ness monster, nicknamed Nessie (or Nessy), is an aquatic animal supposed to living or have lived, in Loch Ness, a freshwater lake in the Highlands in Scotland. The mysterious creature is usually described as looking like a sea serpent or a plesiosaur.

Many enthusiasts go on Loch waters since the early 1930s. Photos and films have shown Nessie, but the authenticity of their source was difficult to prove. Ever since, the mysterious creature has been in the center of numerous works of fiction or imaginary representations.

But On April 2014 came the big news. A satellite image on Apple Maps showed a large creature just below the surface of the water of Loch Ness, which is similar to the description of Loch Ness Monster. Seen in far north of the lake, the shape of the mysterious creature is around 30 meters long.

But until this day some people still doubt all the claimed Loch Ness monster sightings. The search is still going on… This year, 2015, Google reportedly spent a week at Loch Ness collecting imagery with one of their street view “trekker” cameras, hoping they will catch Nessie again…

This is one of the most sensational findings, a giant snake captured in the Red Sea. The news is that the monster was caught by a professional team of elite Egyptian scientists and Egyptian divers.

But this finding has more questions than answers. The size of the giant snake is estimated at around 70 feet long, which is double the length of any known species that now exists. In fact, the biggest “anaconda ever measured was about 28 feet long and 44 inches around.”

According to the publishers, the snake killed 320 tourists and 125 Egyptian divers before finally captured and killed for the team. If this is true, this not only the biggest but also the deadliest snake ever recorded.
We are still unable to accurately confirm this finding. Is it real or fake? You decide…

1. Giant Squid Filmed In South Japan
A giant squid was caught and filmed by Tsunemi Kubodera and his team after 400 hours in a research submarine. The beast was caught on camera about 600 miles south of Tokyo. The scientists were amazed by the finding.

The video shows the monster got frustrated by the presence of the researchers and attacked them. This is not unusual for squids to attack human. They live “a solitary existence, swimming about all alone in the deep sea. Surely, this giant doesn’t live in any group.

The monster was found resting in its natural deep-sea habitat. One of the scientists commented as follow: “when I saw it, well, it looked to me like it was rather lonely.”

See a short clip of the video. It’s only a few seconds, but you can see the size, about 3 meters long, and aggressiveness of the beast, attacking the submarines.

10 Things You Didn’t Know About Halo 5: Guardians Next post