Trumps Locked In Air Force One In Texas After What Lunatic Did To ‘Go Down In History’ Donald and Melania Trump’s plans to visit flood-ravaged Texas were announced several days before their trip, which apparently gave one lunatic time to come up with his own plan to more than derail the president’s travels.

Donald and Melania Trump landed in Corpus Christi, Texas today to tour the area and meet with victims suffering from the storm devastation. Their visit was well-received by those who had eagerly anticipated their arrival, despite the negative criticism Melania endured on social media for looking classy, as usual, in the area. After leaving this town in Texas, the first couple flew to the state’s capital in Austin, where President Trump had some meetings planned to discuss Hurricane Harvey. This portion of his trip was apparently public knowledge as an individual who goes by the online name “BummyShiii” seemed to be aware of and saw an opportunity to “go down in history.”

Natural disasters, destruction from it, and human suffering are not enough to stop a liberal from attacking. In fact, tragedy seems to be just another opportunity for the left to use to their advantage.

We saw the verbal assault Melania endured about her shoes when trying to do a good deed that Michelle Obama never did in her eight years in the White House. However, what “BummyShiii” did to “go down in history,” had Secret Service on edge and Air Force One on lockdown.

The left was too focused on trash-talking Melania’s clothing in Corpus Christi today, to care about the assassination talk BummyShiii was advertising for when the couple made their way to Austin.

Of all the vicious hate posted on Twitter today for the first couple on their humanitarian trip today, what BummyShiii shared was the most actionable. This disturbed individual was happy that the president would be in his town today so that he could do what he’s fantasized about since Trump was elected.

“The Secret Service is investigating claims by poster on Twitter that he plans to shoot President Donald Trump at the airport in Austin, Texas where Trump recently arrived for meetings at the Texas state capital on Hurricane Harvey,” the Gateway Pundit reported.

“The person with the account name @BummyShiii, posted photos from the airport showing Air Force One on the tarmac and said in response to someone who commented he should shoot Trump that he ‘will go down in history today’ and that he was not afraid of the Secret Service,” the report explained of the threat.

BummyShiii was clear in his plan of attack on Trump is stating he wanted to “piss on his ass.”

“Our lame ass president is flying into the airport tom I hope I see him so I can piss on his ass — bummy,” BummyShiii wrote on the social site on August 28, 2017.

On Tuesday, the poster added to that threat with more specific commentary and pictures from the airport.

“I’m standing by some trump supporter ladies at the airport waiting for Donald trump and I’m talking shit about him, LMAO THEY MAD AS HELL.”

“Bummy” was soon emboldened in his assassination efforts by other deranged Twitter-users who got on board with his plan and urged him to become the martyr for their cause.

Twitter user by the name @thayoung_Kris urged Bummy to shoot Trump, “Shot (sic) him when you see him(.) Take one for the team.”

Encouraged by the support, Bummy replied, “Say no more, I will go down in history today” Considering that he was advertising plans for assassinating the president, which is a crime, another Twitter user, @ANAL_Reef, chimed in on the thread to offer a word of caution that the Secret Service could be watching what he’s saying. Thankfully, they were.

“Chill secret service Finna pull up to ur crib, they take that shit serious,” the individual said, for which Bummy had a foul response: 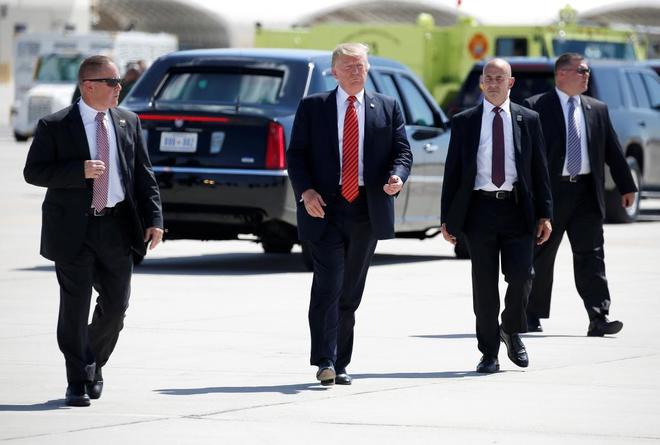 Bummy also added photos to his post to prove he was serious about what he was saying, showing that he was apparently looking at the tarmac where Trump was. “They ain’t playing” the caption said.

All that is left of this Twitter conversation are broken links to where it once was since the account seems to have since been taken down (for good reason). Anticipating that this would soon happen, the Gateway Pundit had the foresight to capture a screen grab of the posts.

“The Secret Service field office in Austin told the Gateway Pundit the agency is looking into the threat to President Trump,” the site reported.

Assassination talk has become casual conversation since Trump has been president and that’s unacceptable. It’s time to start prosecuting each person who communicates crimes against the president before it’s too late.