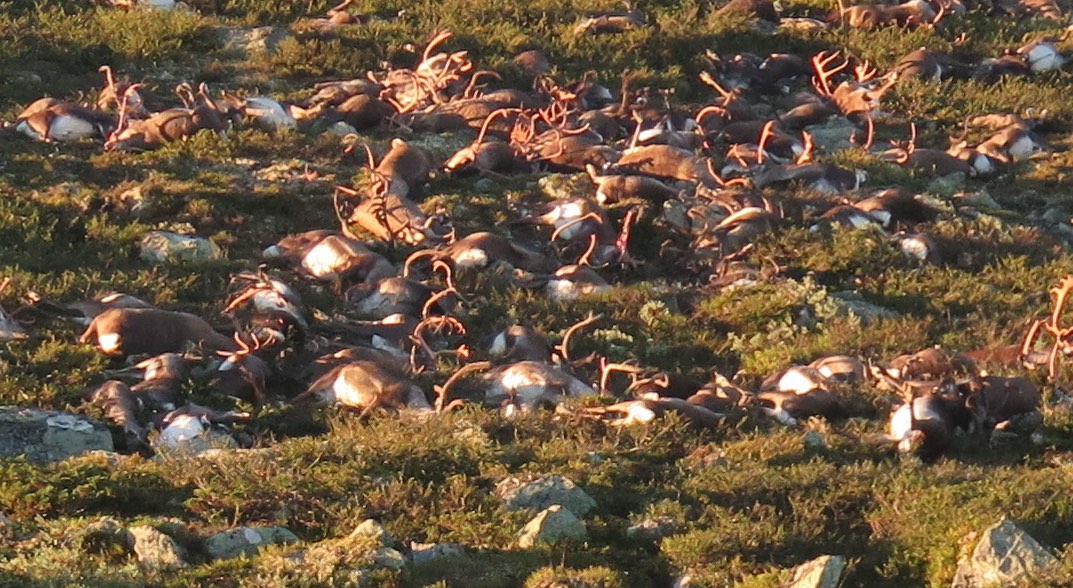 So far 323 corpses have been counted. This high mortality is explained by the habit of reindeer to live close to each other, according to experts. The plateau, which is largely a national park, home to an estimated some 10,000 wild reindeers. The deer had gathered to face the bad weather, causing the lighting to hit a great number.

The 323 Norway reindeer, including 70 babies, were found Friday by a wildlife trooper in the national park. The authorities believe during heavy storms, hundreds of the animals had gathered to confront the bad weather. But lightning struck the herd, leaving no chance of survival. More than 300 of them died instantly. Five of the herd survived but were to be slaughtered to shorten their suffering.

The Norwegian authorities have not yet decided on the fate of the dead animals. “We will decide shortly if we let nature takes its course or if we will do something,” said Kjartan Knusten.

Deaths by lightning are rare, how this was able to produce?

The reindeer were together in the rain. The energy generated in the lightning crossed the floor to the legs of the animals, killing them on the spot.  Lightning occasionally kill groups of animals because they are aggregated under the trees when the weather is bad. But this is very rare.

“First, there’s a direct strike — this is what most people think of when they think of lightning — that hits the tree or maybe the ground nearby,” stated John Jensenius, a security expert of thunders from The National Oceanic and Atmospheric Administration (NOAA). “The energy then spreads along the ground surface, and if you’re anywhere near that lightning strike, you absorb it and get shocked.”

Although the details of the phenomenon are not yet known, scientists of the Norwegian Veterinary Institute are exploring every track, particularly that of chronic wasting disease (CWD), a fatal transmissible disorder close to the mad cow.

The Samples have been analyzed to verify if the animals were affected by CWD, which could be complementary factor of sudden and coordinated death of deer.

However, as pointed out Olav Strand, a researcher at the Norwegian Institute for Nature Research (NINA), “We do not see any link between this disease and the death of these animals, and we never found the trace of this disease on a wild reindeer living in Hardangervidda “.

Red Meat Can Cause Depression, new Study Reveals Next post