Information is surfacing that Speaker Paul Ryan is colluding with the Democrats to shut down the government over the issue of the proposed border wall President Trump promised Americans. Paul Nehlen, who is running for Congress sent out the following tweet on August 24th, “ALERT: @realDonaldTrump Paul Ryan is colluding w Dems to shut down Guv over building wall”. This is a serious accusation, and it would seem Mr. Nehlen likely has proof of this given the severity of what he is suggesting. Taking into account how Republicans betrayed President Trump and America with failing to repeal Obamacare, it’s not inconceivable to think Paul Ryan and other elitist Republicans are conspiring against President Trump.

On the 8th of March of this year, Speaker Paul Ryan was on Tucker Carlson’s show and stated that Congress had a 200-day plan which was to prioritize and pass President Trump’s agenda. Well, as the American people are starting to see, the promises made by Speaker Ryan back in March were just a flat out lie. 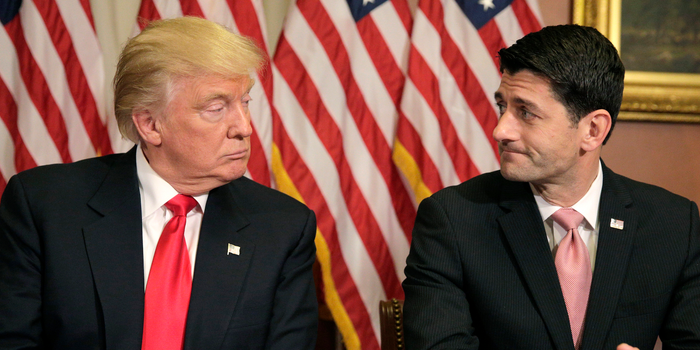 Yet despite the broken promises Speaker Ryan has made, he had the nerve to attack President Trump over his comments about the violence in Charlottesville. There is a large majority of Republicans in the House and Senate who have been working against the President and the American people. Now, with a government shutdown looming, the political elite intends to use this to hurt the Trump Administration.

Adding to an impending government shutdown, it has also been revealed that six key Republicans have been caught planning to remove President Trump from office. Even worse, this plan involved an operative from the Muslim Brotherhood. Huma Abedin is this Muslim Brotherhood agent, and she accessed the inner workings of the Whitehouse while Hillary Clinton employed her. Prissy Holly from Freedom Daily reported recently, “In a breaking document just released by Wikileaks, we’re now learning everything we need to know about the Republican traitors in Washington D.C. In the series of emails discovered on Huma Abedin’s computer, only identified document 1078645, it’s exposed how these 6 Republican traitors are not only working with Hillary to remove Trump from office, but are on her freaking payroll! In the first email, it goes into detail about how funds were being funneled directly from Hillary’s campaign to line the pockets of the Super PACS of Jeb Bush, Carly Fiorina, and John Kasich in order to buy their alliance against Trump.”

The emails which WikiLeaks released revealing this betrayal also document that the Speaker Paul Ryan, Lindsey Graham, and John McCain all received funds from the now defunct Clinton Foundation. The money, which these Republican traitors received, originated from the Saudi Government. From there the Clinton Foundation received the money and passed it along accordingly to the aforementioned Republican traitors.

Of significant note, one email which was sent days before Trump was scheduled to speak at an event in Wisconsin with Paul Ryan read in part, “He is on board, will retract the invitation to speak. Eyes Only.” Some in Washington speculate that Paul Ryan dis-inviting Donald Trump was pre-planned and organized by Democratic operatives funneling money to Paul Ryan.

The WikiLeaks emails also reveal there is a direct correlation with these Republican traitors receiving money from Democratic sources and their attacks on Donald Trump. John McCain, Lindsey Graham, and Paul Ryan all received money from Democratic sources, and they all have attempted to undermine President Trump at key points in time meant to inflict the most damage. Interestingly, traitor John McCain is a lead sponsor of a committee to investigate Russia interfering with the 2016 Presidential election, and he, along with other Republicans are receiving funding from President Trump’s enemies. Since the release of these emails, Speaker Paul Ryan and others are in damage-control mode to spin themselves out of trouble. Since President Trump has been sworn into office, the Democrats, the political establishment, along with the Clinton/Obama shadow government have been in an all-out war to commit subversion of a sitting U.S. President. The American people voted for Donald Trump because they are tired of the same status quo in Washington D.C., as is evident by the actions of the President’s enemies.

President Trump cares about America and Americans first. His enemies care about making themselves rich and treating America as a personal ATM. President Trump, on the other hand, is putting a stop to the Washington, D.C. status quo, causing many people, including Speaker Paul Ryan to become desperate. There are elections coming up in 2018, and Americans will not forget how they were betrayed.