Vaginal cancer refers to formation of malignant growth (cancer) in the tissues of the vagina. Although vaginal cancer occurs in very young women, the cancer affects mainly elderly women. In fact, almost 75% of vaginal cancer patients are aged over 60 years. There are also cases of cancer of vagina in very young girls, of whom mothers have received hormone therapy – specifically estrogen – during pregnancy.

While the majority of Primary vaginal cancers occur on the posterior vagina, the tumor tends to spread either by direct extension into adjacent organs (rectum, bladder, etc), or through the bloodstream to invade the lymph nodes in the groin or other remote sites. Therefore, you have a better chance of surviving when you are diagnosed with early-stage vaginal cancer.

Depending on the group of cells affected, a vaginal cancer can be: 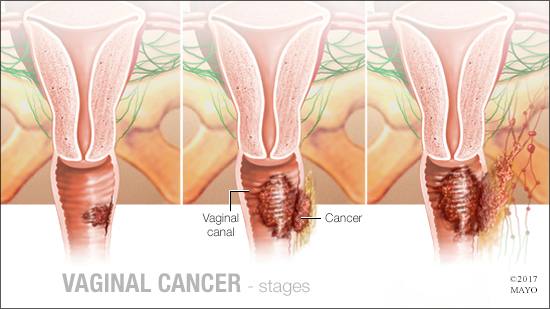 Vaginal Sarcoma – Sarcomas are very rare. They usually begin in the connective tissue cells or smooth muscle cells in the walls of the vagina. Unlike vaginal squamous cell carcinoma, vaginal sarcomas tend togrow fast, and lead to complications. There are at least three types of vaginal sarcomas:

The vagina should not be confused with the vulva, all external parts of the women reproductive tract. The vagina is the organ through which a woman has sex, evacuates fluids during menstruation and gives birth. It is a muscular and very elastic duct, about 12 cm in length, which extends from the uterus to the vulva. The interior of the vagina is covered with a thin mucous membrane (vaginal mucosa) that has many transverse ridges (vaginal rugae) as well as many nerves allowing it to have certain sensitivity. The vaginal mucosa constantly produces various secretions to keep the vagina more or less humid.

Vaginal cancer occurs when certain cells lining the vagina multiply anarchically t form a malignant growth. These cells never stop to grow, and leading to formation of cancerous lesions in the vaginal cavity. In other words, vagina cancer is characterized by uncontrolled proliferation of abnormal cells that line the inner surface of the vagina.

Many factors are suspected in the development of vaginal cancer; the most common include:

In early development of the disease, vaginal cancer can be completely asymptomatic; the tumor is growing in your vagina without producing any symptoms. When symptoms finally emerge, vaginal cancer is characterized by abnormal vaginal bleeding that sometimes occurs after intercourse. The bleeding may be intermenstrual (occurs between menstrual periods) or postmenopausal (after menopause). In addition to non-menstrual bleeding, you can experience the following conditions:

Even if you have the symptoms above, you should not conclude you have vaginal cancer. A Vaginal cancer diagnosis must be done and confirmed by a medical professional. Therefore, if you experience symptoms of vaginal cancer, it is important that you see your gynecologist immediately. The earlier the cancer is diagnosed and treated, the higher is your chance of surviving.

Pelvic Exam – your doctor will do an internal vaginal examination to examine not only your vagina but also other organs of your pelvis to search for signs indicating a vaginal cancer. A speculum examination allows your physician to identify a tumor sometimes in its genesis or more often a bleeding ulcer, which may indicate the cancer.

Pap smear (Pap test) – a Pap smear is a simple and painless medical procedure allowing your physician to check for changes in the cells of your cervix. During the exam, your doctor will collect sample of cells from the cervix to be analyzed under microscope to search for precancerous transformation (dysplastic cells). This is a screening test rather than a diagnosis; the diagnosis is done through a biopsy.

Vaginal biopsy – this histological exam is usually performed under local anesthesia. During the procedure, the specialist collects sample of mucosa from the vagina by a pinch biopsy instrument for histopathological examination.  This biopsy is recommended if your doctor finds suspicious vulvar lesion during the pelvic exam. Vaginal biopsy is especially necessary among older women in whom vaginal cancer is more common.

Colposcopy – this is an important examination in vaginal cancer diagnosis; it allows your doctor to examine your vagina using a binocular microscope (colposcope) that grows twenty to fifty times more the surface of your vagina. A colposcopy allows your physician to detect abnormalities in the vagina: precancerous lesions, cancerous growth, HPV infection, etc.

CT scan – this is an imaging technique that allows detection and visualization of abnormalities in the vagina by submitting the pelvic area to an x-ray beam. This technique is very important in the diagnosis of vaginal cancer; it gives precise images; thereby your doctor can detect whether the cancer is metastatic or not. However, repeated CT scan can be harmful to your body.

Magnetic resonance imaging (MRI) – with an MRI, your doctor can visualize organs inside of your body. In the case of vaginal cancer diagnosis, he can analyze the structure of your pelvis to look for abnormalities and highlight presence of a malignant mass. MRI not only allows your physician to detect the cancer but also to know the exact size and extent of the tumor.

Once the cancer is detected in your vagina, it is necessary that your doctor knows its stage so that he can determine the most appropriate treatment to combat it. In addition, knowing the stage of the cancer gives your doctor an idea of the prognosis.

To determine the most appropriate treatment, your doctor will base on the location of the tumor in your vagina and its stage. Overall, vaginal cancer treatment typically involves surgery, radiation therapy and sometimes chemotherapy.

There are several types of surgery that your surgeon can perform. Surgery performed depends on your age, your health in general, the location and stage of the cancer. In general, surgeries that can be performed in vaginal cancer treatment include:

If you have a stage II, III or IV vaginal cancer, the surgery must be followed by radiation therapy to destroy locally the remaining cancerous cells and reduce the risk of recurrence or metastasis. In rare cases, however, radiotherapy can be administered before surgery in order to reduce the size of the tumor to facilitate its excision.

Prognosis of vaginal cancer depends on the stage of the cancer at diagnosis, your age and state of health to endure the treatment. In general, you’re more likely to survive when the cancer is detected early.

The 5-year survival of vaginal cancer is approximately: Early diagnosis and adequate treatment of HPV infections are also important. The onset of clinical signs such as vaginal discharge, irregular bleeding, and pelvic pain should not be neglected. In addition, urinary or rectal abnormalities should not be overlooked. Report these changes to your physician so that he can perform an exploratory clinical and gynecological exam.