Home All Others Esophageal Cancer Statistics, Causes & Treatment
All OthersDiseases and Conditions

Esophageal cancer, is a malignant condition that develops in the cells lining the inside of the esophagus.

Incidence of esophageal cancer varies geographically. In countries of North America such as the United States, esophageal cancer is uncommon; it represents about 1.8% of adult cancers. While in some other parts of the world such as North China, South Africa, and North-eastern Iran, esophageal cancer occupies an important position among malignant tumors.

According to the National Cancer institute, an estimate of 16,470 esophageal cancer cases was reported in the United States in 2009, killing about 14,530 people. Worldwide, esophageal cancer accounts for about 2.2% of cancer deaths.

Esophageal cancer develops when normal cells of the esophagus, due to a pathological factor, divide or multiply uncontrollably. Your immune system fights those cells to prevent the transformation. If your immune response is not healthy enough, the belligerent cells will continue to multiply and give rise to a malignant growth (cancer).
Some cancers do not originate in the tissue of the esophagus; they are complications or metastasis of a cancer from another organ in your body that comes installed on the lining of the esophagus. The cancers most likely to spread into your esophagus include:
• bone cancer
• breast cancer
• liver cancer
• kidney cancer
• skin cancer
• laryngeal cancer
• pharyngeal cancer
• lung cancer
• prostate cancer
• testicular cancer

Several factors are suspected in the development of esophageal cancer; they vary depending on the type of cancer. Squamous cell carcinoma is often the result of smoking and excessive alcohol consumption. Adenocarcinoma is often associated with Barrett’s esophagus, which is a pathogenic change in the cells lining the lower esophagus due to long-term gastroesophageal reflux disease (GERD). In general, factors that can increase your risk of having esophageal cancer include:

You can have esophageal cancer for a long period of time without experiencing any signs or symptoms. Meanwhile, the size of the tumor continues to increase in the esophagus and thicken its lining. Most of the times, symptoms of esophageal cancer emerge when the cancer is fairly advanced. Esophageal cancer is often diagnosed late; that’s what makes it so difficult to completely eradicate even with effective treatment.

In general, you will experience these signs and symptoms if you have esophageal cancer:
• difficulty swallowing (dysphagia)
• cough
• hoarseness
• painful swallowing
• weight loss
• loss of appetite
• vomiting blood (complications)
• feeling of discomfort or illness
• indigestion associated with heartburn
• pain in the throat, chest or back

Esophageal Cancer Complications
Without treatment, an esophageal cancer victim will survive for about 6-12 months after diagnosis. Cancer of the esophagus tends to develop very quickly. The primary cancer cells can pass into the lymphatic channels to give rise to other cancers (metastases) in nearby or distant organs. The sites most commonly affected by metastasis are the lungs and liver. The most common complications of oesophageal cancer include:

Before considering sophisticated diagnostic techniques, your doctor will ask you questions about your current health and your medical history. In addition, he will do a physical examination of your mouth and throat looking for esophageal cancer signs like difficulty swallowing, pain behind the chest bone (sternum), and painful swallowing. However, these signs are not enough to establish the diagnosis; more special testing must be done to confirm an esophageal cancer diagnosis. 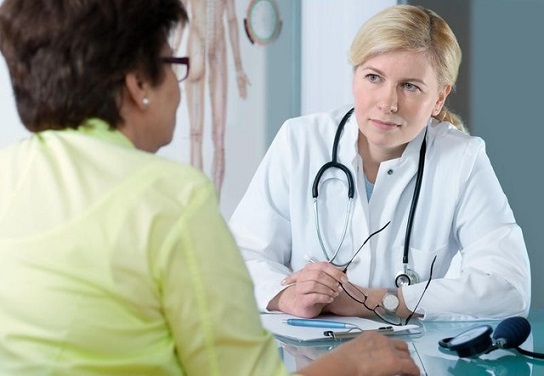 Upper GI endoscopy – This exam allows your doctor to detect precancerous or cancerous formations in your upper GI tract, which is made up of the esophagus, stomach, and duodenum. During the examination, your physician uses a hollow tube equipped with a lens called an endoscope. He passes the endoscope down through your throat into your esophagus to examine your esophagus cavity with precision. Endoscopy may be uncomfortable for some patients, but it is completely painless.
Barium swallow – Also called upper gastrointestinal (GI) series, a barium swallow is performed to detect abnormalities in the upper digestive system such as ulcers, tumors or inflammation. While standing in front of the x-ray machine, you will be asked to swallow a contrast agent called barium sulfate. The x-ray will control the progress of the liquid through your system, and image the hollow structure of your esophagus.
Your doctor will recommend barium swallow if you experience trouble swallowing, gastroesophageal reflux, pain in the chest or abdomen, unreasonable vomiting, indigestion, or blood in the stool (which indicates internal bleeding).
Biopsy – To confirm the diagnosis accurately, your doctor will recommend a biopsy. It involves removing cells or tissues of your esophagus to examine under a microscope. Your physician may also take samples of lymph nodes near the tumor to examine for laboratory analysis. If cancer cells are found, additional procedures will be performed to determine how fast those cancer cells grow.
Ultrasound – If your oncologist suspects that the cancer has spread to other organs, he may recommend an ultrasound of the chest and liver to confirm the presence of cancer in these sites.

Esophageal Cancer Stages
Once the presence of the cancer is confirmed in your esophagus, your oncologist will determine its stage. This is an important step because it will help to choose the treatment most appropriate and effective to fight the tumor. In general, the stage of esophageal cancer is determined by its size and degree of the cancer cells spreading within the body.

To confirm precisely the stage of the tumor, surgery, additional testing, or removal of some lymph nodes near the tumor may be necessary.
• Carcinoma in situ – Also called stage 0, the cancer is localized in the first layer of the esophageal mucosa.

• Stage I – During this early stage, the cancer is localized only in the top layer of cells lining the esophagus.
• Stage II – At stage II, the cancer has invaded the deeper layers of the esophagus and possibly the lymph nodes nearby.
• Stage III – A stage 3 esophageal cancer has spread to the deeper layers of the esophagus wall and can affect surrounding tissues or/and lymph nodes.
• Stage IV – At this last stage, the cancer has spread to other parts of your body such as the lungs and liver.
• Recurrent – A cancer that has returned after treatment is considered a recurrent cancer. In general, a recurrent esophageal cancer is more difficult to treat, and your survival chance is lower.

Treatment of esophageal cancer depends on many factors such as the extent of the tumor, your age, general health, medical history, the stage of the cancer, and existence of metastases. Knowing these details, your doctor can determine which treatment will be most effective to fight the cancer in your esophagus.

In general, treatment of esophageal cancer includes surgery, chemotherapy, radiotherapy, and sometimes clinical trials.
Surgical treatment
If you have a small or superficial cancer, your doctor may reduce the size of the cancer by electrocoagulation (also called radio frequency diathermy or short wave electrolysis), photodynamic therapy, or brachytherapy. In this case, the surgery will involve the removal of the entire tumor and attachment of the esophagus with a portion of your digestive tract.
In advanced cancers, surgery is performed to remove part of the esophagus, surrounding lymph nodes, and the upper part of the stomach. The remainder of your stomach is then reattached to your esophagus. It is a sophisticated surgical procedure reserved for patients with advanced esophageal caners.
Even when the operation is performed by a competent surgeon, it can lead to serious complications like infection, bleeding, and leakage from the area where the remaining esophagus is reattached.
Surgery cannot be performed in all cancers of the esophagus; in fact, only 30% of esophageal cancers can be operated. Alcohol and smoking related esophageal cancers often lead to heart and lung complications. In addition, secondary lung or oral cancers are sometimes discovered at the diagnosis.
If the cancer is too advanced, or if you are too old to undergo surgery, your doctor will consider chemotherapy together with radiotherapy. For some patients, this combination offers recovery and survival rate similar to those of surgery. 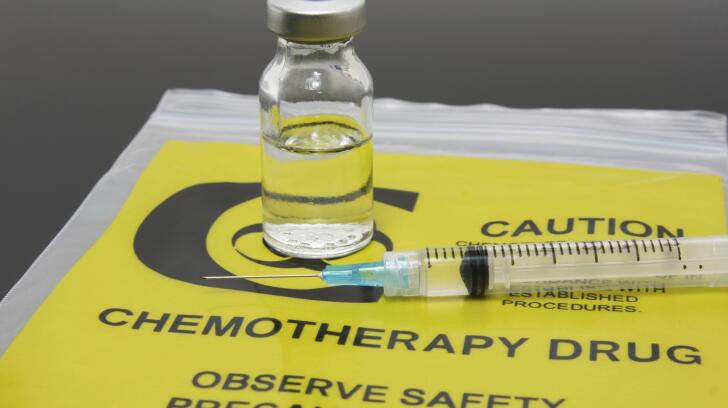 chemotherapy alone or in combination with surgery. However, it rarely leads to a complete cure; chemotherapy helps reduce symptoms associated with the disease such as painful and difficulty in swallowing (dysphagia). Common chemotherapy drugs used to treat esophageal cancer is 5-FU associated with cisplatin. Vinorelbine, with or without cisplatin, may be useful in the treatment of squamous cell carcinoma of the esophagus. Finally the combination of5-FU and irinotecan is sometimes used if the above protocols do not work.
Chemotherapy drugs cause side effects, which may include:

In advanced esophageal cancers or when the tumor is considered inoperable, a combination of radiotherapy and chemotherapy (radio-chemotherapy) is often used. It includes five weeks of radiotherapy (dose of 50 Gy) and chemotherapy. Your physician may also perform a radio-chemotherapy in order to reduce the tumor and make it operable. Usually, this procedure requires about five weeks of treatment, and surgery is considered depending on the response of your body to the therapy.
Like chemotherapy, radiation therapy is often accompanied by several side effects, which may include:
• sore throat
• voice changes
• mouth sores
• loss of taste or smell
• sensitivity of the mouth and gums
• lower production of saliva
• redness and dry skin at the treated site

Clinical Trials – Clinical trials are new scientific studies aimed at evaluating new methods of prevention or/and treatment of a specific cancer. Some clinical trials conducted on medications aim to reduce side effects of chemotherapy drugs. Often, physicians are aware of the availability of those drugs. Ask your doctor if there is a trial available for your type of cancer.

Esophageal Cancer Prevention
The best way to prevent the onset of cancer is to live a healthy lifestyle. Even if you are at low risk, cancer could develop with continued exposure to carcinogens.

Esophageal cancer is not attributable to a unique cause; several factors can cause the formation of cancerous cells in your esophagus. Some risk factors such as genetic and age are impossible to change, but others are easily preventable. If you want to prevent cancers, including esophageal cancer, it is important to:
• Avoid tobacco smoke, including second hand smoke.

• Adopt a healthy diet: a diet containing 5-10 servings of fruits and vegetables a day may help prevent occurrence of esophageal cancer.

• Tell your doctor or dentist of any change that indicates the presence of cancer.