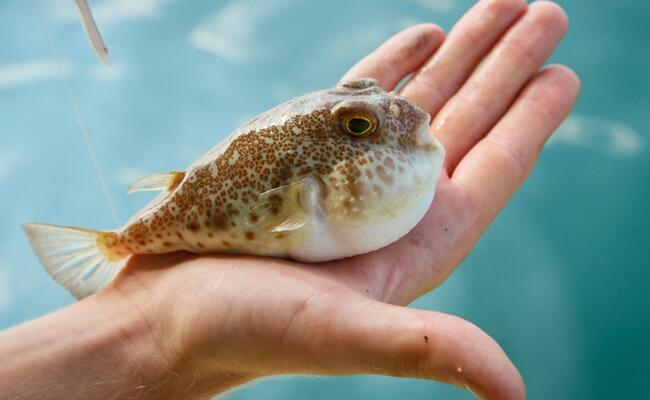 Puffer fish is the second most poisonous vertebrate in the world (the first one is golden dart Frog) and can cause rapid and violent death… Ironically, this fish is commonly consumed in Japan and Korea, although only licensed chefs are authorized to cook it… Otherwise, 100’s of people would die from eating puffer fish.

This sea snail has a venom capable of killing 20 people in minutes. Fortunately, It is found only in tropical and warm seas in the Mediterranean and western Indo-Pacific regions, and it barely attacks people.

Poison dart frog is the common name of a group of frogs in the family Dendrobatidae living in tropical and humid region of Central America and South America… They come in many colors like yellow, blue, green and red; they are beautiful, giving you feeling to touch them… But It is through their skin they transmit the venom, which means that a single touch can cause lead to death.

This sub-Saharan African snake is a very fast and aggressive predator. It has a nicknamed “the kiss of death”, and it is famous there as a killer the fact it often attacks humans… One bite of black mamba can kill a man in less than one hour.

The stonefish is the most venomous fish in the world; it uses neurotoxins to kill its prey… It tends to camouflage itself in its environment, such as taking a sandy color and remaining calmly on the sand and patiently waits for fishes to pass by in order to attack them at full speed.

The venom of Inland taipan is 50 times more toxic than that of the king cobra, and the amount contained in a single bite can kill 100 people!… Fortunately, this snake is not aggressive and tends to walk away of humans, one of the main reasons less taipan related deaths have been reported.

7 Cancer Causing Things You Do Every Day Next post

Train a Dog to Walk Through Legs in 4 Simple Steps

Train a Dog to Do High Five in 5 Simple Steps

11 Most Powerful Animals in the World