On Wednesday, North Korea’s state-run media released several new photographs which depict leader Kim Jong-un in a weapons lab. The propaganda machine said the dictator urged his engineers to “produce more solid-fuel rocket engines and rocket warhead tips.” However, it’s what was spotted in the background of the newly released photographs that is most deeply disturbing.

A closer look at the pictures released by North Korea on Wednesday reveals that Kim Jong-un is standing near a drawing of a three-stage rocket called the Hwasong-13. 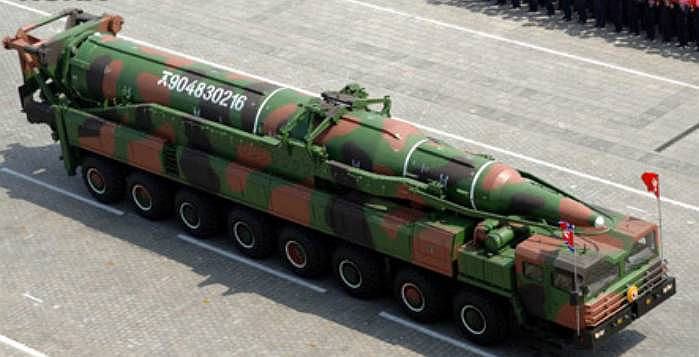 This would be North Korea’s most powerful weapon to date. He was visiting the Chemical Material Institute of the Academy of Defense Science when the pictures were taken.

KCNA also unveiled photos showing disturbing diagrams hanging on the wall behind the despot during Kim Jong Un’s visit to the plant that makes the solid-fuel engines for the country’s ballistic missiles.

One showed a missile called Pukguksong-3, which appears to be the latest in the Pukguksong, or Polaris, series. The other was more difficult to discern but appeared to be in the “Hwasong,” or Mars, series.

North Korea looks to follow-up on the two successful ICBM launches it carried out in July — the second being the longest such test in the history of the the regime. Officials believe North Korea launched a KN-20 ICBM both times, the launches coming about two weeks apart from one another. [Source: Fox News].

Retired Brig. Gen. Moon Sung-muk, an arms control expert who has represented South Korea in military talks with North Korea, said this detail in the pictures was not released by accident. “It’s likely meant to show that they are working on a three-stage design with greater boost and range,” explained Sung-muk. “They tested the Hwasong-14, which has an estimated range of 9,000 kilometers, 10,000 kilometers. This one can go further, is the message.”

Indeed, if current estimations are correct, North Korea does not have much further to go before they obtain a weapon capable of reaching major metropolitan areas within the United States.

The Hwasong-14 ICBM was estimated to have a range of 6,200 miles. It would take a range of 6,800 miles to reach New York City or Washington, D.C. [Source: Western Journalism] The concerning pictures were released as North Korea criticized the military exercises taking place in South Korea by U.S. forces and their South Korean counterparts. “This drill is too radical and dangerous to wrap this precarious action as ‘yearly’ and ‘defensive,’” North Korea commented. “The U.S. should not forget that their opponent is armed with nuclear weapons and ballistic missiles.” The rogue regime added that America should “wake up from their old way of thinking that their land is safe and the death is an affair of others.” However, this an awfully foolish statement coming from the poorest country on the planet. If Kim Jong-un thinks he can tango with the U.S. military, let him try. We’d wipe him from the face of the earth in seconds.

4 Countries Refuse to Take Back Their Deportees, Trump Fights Back Previous post