Last week, New York Giants player Odell Beckham Jr. “took a knee” for the national anthem, and he “took a pee” in the end zone later, saying it was on President Donald Trump. 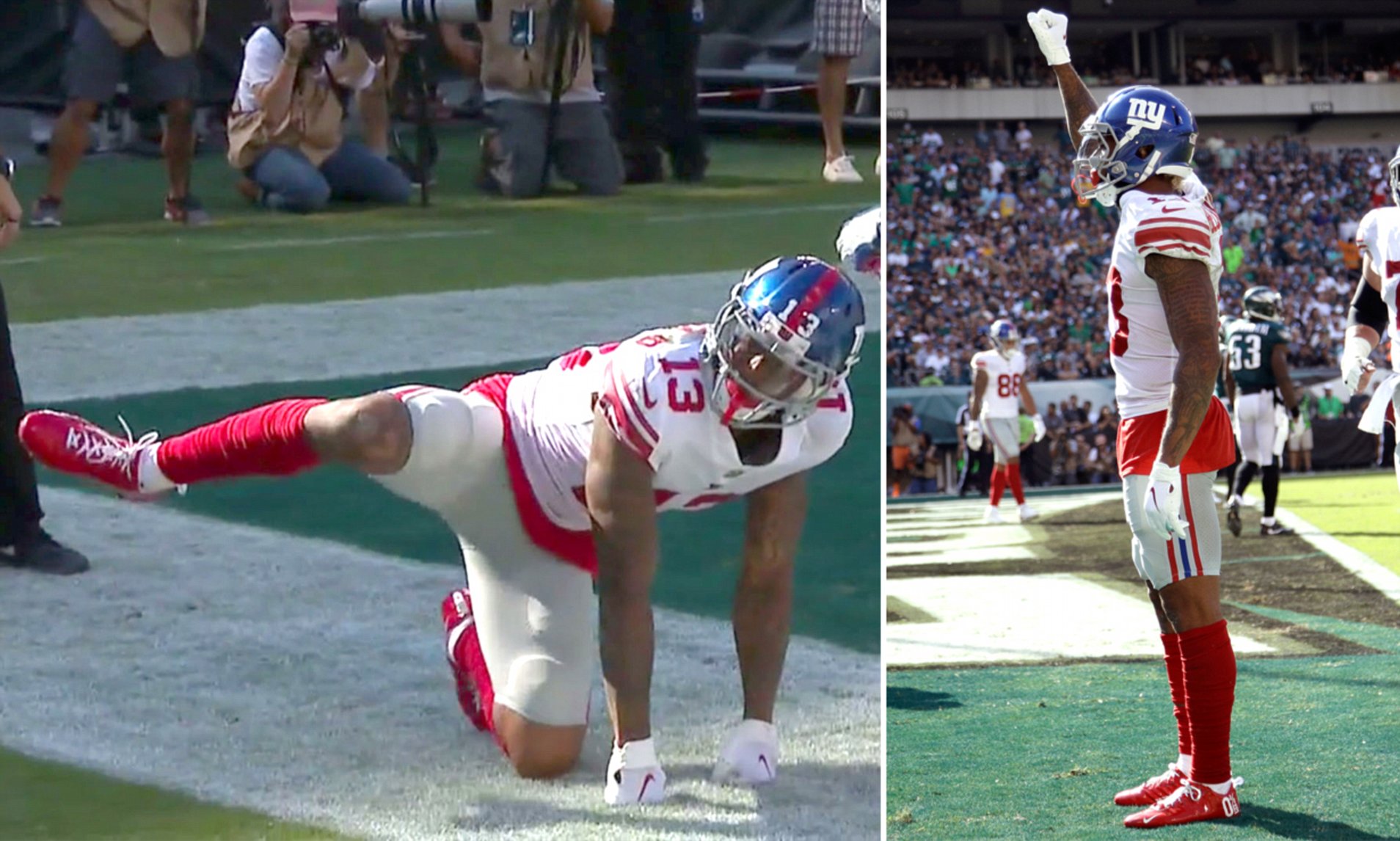 As if that wasn’t enough, he then made the “black power” sign after he scored a touchdown. However, this week’s game didn’t go so well for Beckham Jr. In fact, he was left crying like a baby after he got a brutal surprise, and now, patriots across the country are cheering. Don’t miss this.

These arrogant NFL players, like Odell Beckham Jr., think they can disrespect our flag and mock our president and that nothing can touch them. Well, guess what? Poor Odell Beckham Jr., one of the most obnoxious idiots who think there is no price to pay for his blatant disregard for the country that made him a millionaire, just got a brutal surprise, and it left him in a puddle of tears.

Before we get to that, let’s review Beckham Jr.’s outlandish deeds and statements. “I was in the end zone, I scored a touchdown — I’m a dog, so I acted like a dog,” was the explanation Odell Beckham Jr. gave for his behavior, according to The New York Post. Later, the Giants player made sure he explained he was, in essence, peeing on Trump and the president’s statement that the owners should “fire those SOBs who take a knee.”

Referencing Trump again, Beckham Jr. stated, “I was trying to find the imaginary ghost that I peed on, but I didn’t see him.” During the same game, he arrogantly pumped his fist and lowered his head, a clear “black power” sign made famous during the 1968 Olympics and a symbol of the Black Panther Party. He came out this week ready for more antics. He linked arms with other players during the national anthem as it seems the owners of the Giants aren’t allowing the “take a knee” idiocy to go on. However, that’s when everything went really wrong for Odell Beckham Jr.

Karma came calling for Mr. Beckham when he went up to make a catch and came down wrong on his left foot. If you watch the replay below, it’s brutal. What it means to the man who just one week ago was “pretend peeing on the president” is really horrendous news — a total break of his fibula that will require extensive surgery..

“This week, the disrespectful NFL player had a much different experience on the field: The alarming Giants season is going full disaster. Odell Beckham Jr. was carted off the field in the closing minutes of Sunday’s home loss, 27-22, to the Chargers, the team’s fourth (and best) wide receiver to be hurt on the day,” reports 100% Fed-Up.

He was literally crying and likely not from just the pain but the knowledge that he is done playing this year. His anti-Trump, anti-American stunts last week have now come back to haunt him. He will never garner a huge contract, and his endorsement deals will likely dry up. “His latest setback is the worst of his career, but it raises red flags for the wide receiver that may make the Giants hesitant to throw record-breaking amounts to him,” reports SB Nation.

Vice President Mike Pence also made headlines as he did his own walk out of the Colt’s game after 23 San Francisco 49ers were seen “taking a knee.”

Pence and his wife Karen waited for the national anthem to end, and then, that was it. They walked out, setting an example that this will no longer be tolerated.

Even Jerry Jones, the owner of the Dallas Cowboys who had joined his players in a disrespectful demonstration a few weeks ago, got a brutal wake-up call from the Dallas fans. Jones has now changed his tune, of course, as he sees his profits go down. More and more, it seems those who have engaged in the anti-American, pro-Black Lives Matter bullcrap are finding out the hard way that most Americans are livid at their arrogance and un-American behavior. Some are getting instant karma with injuries, some are getting booed and their endorsements aren’t being renewed.

Whatever the case, Odell Beckham Jr. should be an example of what can happen in the blink of an eye, so those NFL players need to be gracious to the fans and be respectful of the veterans who died giving them the freedom to make millions playing a game. That’s what Old Glory represents; it’s as simple as that — as simple as standing for the national anthem.