Allergy is abnormal and specific reaction of your immune system in contact with a foreign substance (allergen), which does cause not trouble in most other people. For allergy occurs, it is necessary that a first contact took place between the allergen and your body.

The role of the immune system is to recognize antigens that are at the surface of micro-organisms and produce antibodies (immunoglobulins) and sensitized white blood cells (lymphocytes). They (immunoglobulins and lymphocytes) come into contact with these antigens to destroy any micro-organism that represents a threat for the organism. In allergies, a similar process occurs. However, the immune system produces antibodies that attack harmless substances (allergens that are mistakenly identified as dangerous antigens).

What are the causes of allergies?

Heredity is one of the main causes of allergies. Allergies tend to occur mostly in people who are exposed genetically; that is, those having a family history of allergy. It is very common to find several members of the same family affected by the following medical conditions: asthma, atopic eczema, allergic rhinitis or hives. Other factors favoring the development of allergic reactions are environment (animals such as cat, dog), viral infections and emotional factors. Though there are allergy sufferers everywhere in the world, people in developed countries mostly suffer from allergies. Scientists estimate that more than 50 million North Americans are affected by allergic conditions.

There are different types of reactions in allergies. In allergies, there are exaggerated or inappropriate reactions called “hypersensitivity reactions” that occur. Based on the mechanisms involved and time taken for those reactions to develop, they are divided into four types: type I, type II, type III and type IV.

Type I Hypersensitivity is the most common. Scientists believe that allergens in cause are from pollen, mites contained in house dust and animal dander, mold air, certain medications and foods (eggs, milk, dried fruits, nuts, etc.), insect venom (bee, wasp), and food dye. When there is contact with one of these allergens, the immune system or Immunoglobulin E (IgE) bind to the mast cells (basophils), cells of the skin and mucous membranes. Those cells contain histamine, a substance responsible for the symptoms of inflammation and muscle contraction. In repeat contact, those allergens join the IgE, which leads the body to release histamine and other allergic symptoms such as asthma, diarrhea, hay fever, hive, rash, itching, swelling, runny nose, stuffy nose, sneezing, and difficulty breathing.

Type II Hypersensitivity – also called cytotoxic hypersensitivity is less common. It involves Immunoglobulin G (IgG) and Immunoglobulin M( IgM). The antigens causing Type II Hypersensitivity (T II H) are mostly endogenous (originate from within an organism, tissue or cell). It (T II H) is responsible for transfusion reactions (adverse effects during or within 24 hours of a blood transfusion), drug intolerance (inability of the body to absorb or metabolize a specific drug), hemolytic anemia (red blood cells in the blood) and more.

Type IV Hypersensitivity – also called Cell Mediated or Delayed Type Hypersensitivity, Is a delayed cellular reaction as the reaction takes two to three days to develop. It is responsible for consecutive allergic dermatitis when the skin is in contact with certain materials (nickel, detergents, cosmetics) and granulomas (inflammation of a small area in a tissue due to injury or infection). In addition to granulomas and allergic dermatitis, type IV hypersensitivity is involved in the development of many auto-immune and infectious diseases such as tuberculosis, leprosy, Blastomycosis histoplasmosis, toxoplasmosis, leishmaniasis, etc.

Symptoms of allergies can be mild, moderate or severe; those symptoms vary from one type of allergy to another. Treatment depends largely on the characteristic of the symptoms. Mild allergy symptoms can be treated by self-care or home remedies and avoidance of the allergen in question; moderate and severe symptoms, however, often require medical attention.

Mild Allergy Symptoms: usually mild allergic reactions affect a specific area of the body; they do not invade other organs. Most common mild symptoms can include mild-moderate eczema, hay fever, red eyes, and others.

Moderate Allergy Symptoms: moderate allergic reactions (or moderate allergy symptoms) are those, although are not life–threatening, affect several organs or spread to other distant body parts; this list includes severe eczema, general itching, difficulty breathing (asthma), and other reactions.

Severe Allergy Symptoms: severe symptoms of allergy can include all the mild and moderate symptoms. The difference, they tend to cause anaphylactic reactions, sudden and severe allergic reactions characterized by a sudden drop in blood pressure (hypotension), rapid heartbeat (tachycardia), loss of consciousness and sometimes death. This requires urgent medical care to treat the symptoms and prevent their recurrence (prevention).

Eyes: respiratory allergy is often accompanied by hay fever and eyes problems. The eyes may become red and watery, associated with a burning sensation or/and sensitive to light.

Nose: Some allergies can cause constant runny nose, stuffy nose, and sneezing (allergic rhinitis). Allergic rhinitis can perturbate sleep and lead to loss of appetite and concentration, and inflammation or infection of the membrane lining the eyelid (conjunctivitis). These symptoms usually occur when the allergens are constantly present in the environment: mites, mold, cats, dogs, pet hair, and others.

Mouth: most types of allergy can cause swelling of lips associated with Itching. This might involve a drug reaction or an oral allergy syndrome in connection with certain food substances mainly profilin, a protein found in birch pollen but also in apples, pears, and others. Although rare, allergies can also develop due to dental amalgams containing mercury or dental appliances containing nickel.

Face: certain allergic reactions can lead to swelling of the dermis (the layer beneath the skin) of the face; this is called angioedema or Quincke’s edema. Angioedema is often the result of wasp bite or sting, drug allergy, and allergy to peanuts. It is characterized by a particular facial skin rash (urticaria) associated with edema. This type of allergy manifests abruptly and extends from the skin to the subcutaneous tissues and mucous membranes. In severe cases, the extension of the edema in the larynx can block the airflow and cause anaphylactic shock (a life-threatening type of allergic reaction) associated with cardiac arrest.

Skin: after taking certain drugs (aspirin, penicillin and others) or foods (strawberries, shellfish, and others) some people tend to have their skin covered with swollen pink or red patches, causing a desire to scratch. Papules often disappear within an hour, but may appear on other parts of the body. In contact with allergenic substances (jeans buttons containing nickel for example), two to three days after contact, contact dermatitis (a form of skin reaction resulting from exposure to allergens or irritants) may occur on the belly, or near or at the level of the earlobe in women wearing earrings. In other cases, there may be an appearance of dry, irritated, itchy, sharp red papules and plaques with crusts (atopic eczema or atopic dermatitis). The lesions may cause itching which can lead to bleeding when scratching.

Bronchi: certain allergic reactions can lead to inflammation and an abnormal narrowing of the bronchi (asthma), which results in wheezing in the majority of patients. It is typically manifested by a reduced ability to exhale, causing the air to get stuck inside the lungs. Without effective treatment or immediate care, this allergic reaction can be life-threatening.

Abdomen: If you have food allergy, you may have abdominal pain or discomfort. In young children, food allergies are common, particularly allergy to cow’s milk. However, colitis is common in infants and can be taken for allergic reaction; this is a specific medical condition that should not be taken (and treated) for food allergy.

Allergy to cereals (wheat, rice, maize, and others) can induce diarrhea and lead to intentional weight loss. However, most diarrhea have nothing to do with allergy. The possibility of food allergy will be raised if the diarrhea persists and a history of allergy exist in the family or if the child has, moreover, signs of skin allergy. In some cases, chronic constipation can be installed in children allergic to cow’s milk; however, this disorder is less common transit than diarrhea caused food allergies.

What is the diagnosis of allergy?

Diagnosis is done from personal and family history of the patient, his habits, lifestyle, and clinical signs (eczema, rash, rhinitis, asthma, diarrhea, etc.). Most of the times, the diagnosis is supported by skin test.

In most cases, your physician will recommend skin test and blood test:

Skin test – The skin test is the most commonly used method to detect allergens substances. Your dermatologist pricks your skin and exposed the sample to small amounts of the proteins found in your suspected allergen. This test allows your physician to discovering the degree of sensitization to an allergen.

Blood test – To complete the skin test, blood tests can be done to help quantify, in your bloodstream, cells associated with the allergic reactions, immunoglobulin E (IgE) antibodies. 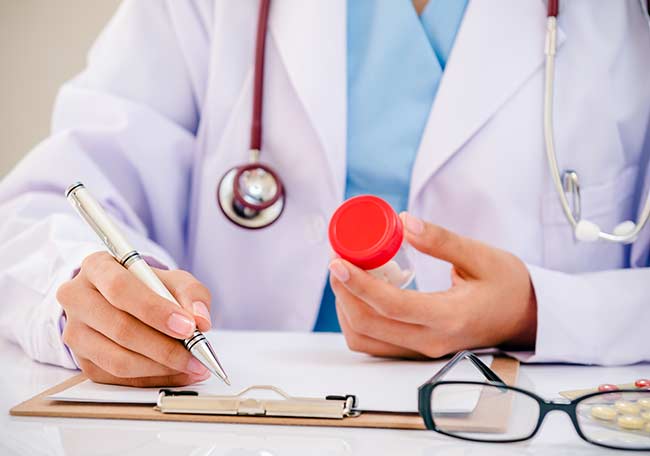 The effective treatment of allergies is to avoid, as long as it is possible, any contact with the allergen in question, or purify the air you breathe in with an effective air purifier(for airborne allergies). The desensitization for allergies to insect venoms, mites and certain pollens: administering, under strict medical surveillance, and very small doses gradually increasing allergen, promotes the formation of antibodies, which block the subsequent allergic reactions. Followed for at least three (3) years, this treatment is successful about 2 to 3 cases. However, it can cause itching, rash, and sometimes serious side effects such as asthma and anaphylactic shock (a life-threatening type of allergic reaction to a substance like insect venoms). Minor allergies can be treated by taking over-the-counter antihistamines [Benadryl, Claritin, Chlor-Trimeton, Dimetane, Zyrtec, and Tavist (clemastine)]

Depending on your state of health, your physician can prescribe you Allegra-D, Claritin-D, and Semprex-D for nasal allergies; Naphcon, Vasocon, Zaditor, Patanol and Optivar for allergic conjunctivitis