Your gallbladder is a small pear-shaped organ located in the abdomen, under the liver. It stores bile secreted by the liver, which is released when fat enters the digestive tract. The bile helps to emulsify fats of food and facilitate their digestion. Among some people, this process does not work properly as it should; the gallbladder cannot empty enough (obstruction of the biliary tract). Therefore, the bile promotes cholesterol crystallization resulting in gallstones formation.

What are the causes of gallstones? 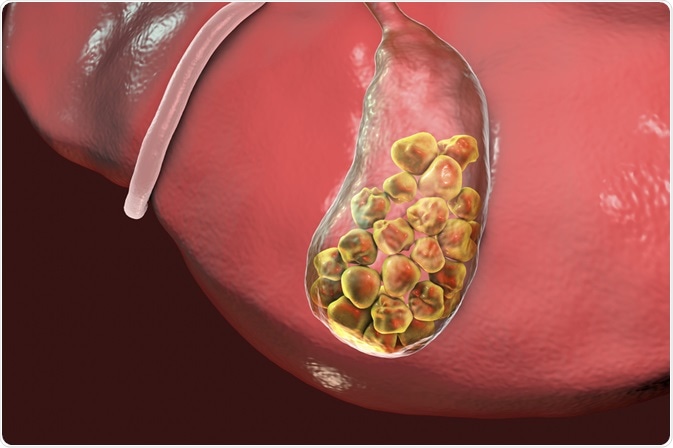 Gallstones, also called Bile duct stones, are due to the retention of bile from the gallbladder for a long period of time. Gallstones can be also the result of clumping, in the gallbladder, of cholesterol and various other elements such calcium in large quantities. Gallstones formed of cholesterol are usually green, white or yellow (Cholesterol stones) and represent approximately 80% of gallstones. The same, they may be brown or dark (Pigment stones) and containing a high concentration of bile pigments.

What are the risk factors of gallstones?

Risk factors of gallstones may include: In the initial phase of gallstones, it is usually asymptomatic in most people. The stones present no clinical signs, but continue to multiply or increase in size silently. They are, most of times, discovered during medical exams (x-ray, abdominal surgery) performed for other reasons, and usually required no special treatment. The disease becomes problematic when large stones block the cystic duct, and provoke severe biliary colic. The pain may last for weeks or months, even years in some people. The attack can persist from 20 minutes to several hours. Usually, after an initial attack, recurrences are often more frequent.

Other common gallstones symptoms include:

What is the diagnosis of gallstones?

When there are no symptoms at all, gallstones can be discovered during routine medical exams. In case there are symptoms and igns, your physician may recommend an ultrasound of the abdomen to examine the gallbladder and other internal organs of the abdomen: kidneys, liver, spleen, and pancreas. Your doctor can also recommend other tests such as

Radionuclide scan – right brfore the test, a specialist inject a radioactive chemical (gamma) in your bloodstream. And then, he uses a gamma camera to detrect signs of infection or bile duct obstruction. Usually, you should not eat or drink for at least four hours before the test

Abdominal x-ray – X–ray of the Abdomen allows your health care provider to picture the aspect of the gallbladder and detect certain disorders. Furthermore, abdominal x-ray is often performed to diagnose the problems of the urinary tract, gastrointestinal perforation (peptic ulcer, for example), constipation, bowel obstruction, etc.

Oral cholecystogram – using a fluoroscope, a health care specialist perfoms this radiographic exam to detect gallstones in your gallbladder or bile duct.

CT scan – CT scan is often included in the diagnosis of gallstones. CT-scan is a medical imaging technique which helps your doctor to create cross-sectional pictures of organs in your body including the gallbladder.

All those exams provide additional information needed for the diagnosis. In addition, blood tests can be done to check for excess bilirubin or abnormal liver enzymes, which indicate a biliary obstruction. The blood test is also performed to detect trace of infection.

Medications – Certain analgesic and antispasmodic medications can be used to relieve the symptoms of gallstones, mainly biliary colic. Antibiotics can be prescribed to patients who have infections. The dissolution of the stones can be done by ursodeoxycholic acid (ursodiol) taken orally. However, ursodeoxycholic acid is used when the stones are small, or when there are no complications. In addition, the treatment should be continued for up to two years, and its effectiveness is less than 60%. Another method of dissolving gallstones is contact dissolution therapy – injection of the organic solvent methyl tert-butyl ether (MTBE) into the gallbladder to dissolve the stones.

Laparoscopic cholecystectomy – in this method, the surgeon makes small incisions of 5 to 10 millimeters, which allow the insertion into the abdomen a surgical instrument called laparoscope. The optical system is connected to a computer monitor allowing the surgeon to reach the gallbladder. The manipulation of the laparoscope is done outside the abdomen, under the control of the computer picture. This method causes less postoperative pain and less or no scar. In case of difficulties, open cholecystectomy may be necessary.

Open cholecystectomy – this is a surgical procedure involving the opening of the abdomen by a large incision, leaving the direct passage to other surgical procedures in the abdominal and pelvic organs. The opening is often from the sternum to the pubis giving possibility to different cuts. The gallbladder is reached easily, but there is high risk of scars and post-surgical pain.

After cholecystectomy, it is recommended to eat a low-fat diet for at least one month following the surgery. As the “reservoir of bile” (gallbladder) does not exist anymore, the body will need a little time to adapt and transform the bile duct in a “pretend” gallbladder. You may have diarrhea or more bowel movements than usual.

To reduce the risk of gallstones, it is important to have a healthy and balanced diet. It is recommended to consume a lot of dietary fiber, cruciferous vegetables, and fruits. These foods play an important role in the elimination of cholesterol responsible for forming stones. Avoid eating too much unhealthy fats and foods rich in calories. Besides diet, regular physical exercise is also necessary.

What are the complications of gallstones?